The finale of the 2019 24H Series season took place in Austin, TX for the third consecutive time. This was also the final round of the Champion of the Continents championship where we lead the GT4 category. When the season started in Dubai I was shocked to be standing on the grid in the UAE and had no intentions on chasing a championship in GT4. It seemed too unrealistic for someone like me I thought. However, when Olaf crossed the line in second place in Dubai it was too goo

The season comes to an end next weekend as we head to our finale in Texas. It has been an amazing year being able to race with Sorg Rennsport in a GT4 BMW and one to never forget. With two second place finishes we currently find ourselves leading the GT4 championship in the Champion of the Continents division and competitively placed overall. The GT4 lineup in COTA will be strong so we need to focus on our own race and try to get up to speed quickly. While the championship ca

My final race of the year was at the Circuit of the Americas in Austin Texas. I was lucky to join Sorg Rennsport again in their BMW M235I Racing Cup car competing in the Cup 1 class within the Creventic 24H Series. Our weekend started on Thursday where the team finished up some prep work and we decided to opt out of the optional test. However, with permission from the series, the team asked me to go out for the final twenty-minutes of the optional free test to shake the car d

I'm very pleased to welcome Italgem Steel as a partner for the upcoming 24H Series at the Circuit of the Americas in Austin, TX. First things first checkout their website HERE and use promo code RACER10 to get 10% off your order! They have a huge variety of men and women's jewlery ranging from rings to bracelets. These are unique items though, probably not what you have in mind! I'm currently wearing one of their rings as my new wedding band and wear one of their bracelets da

I'm extremely excited to announce my newest partner. Born in 1988, Backyard Buddy manufactures garage lifts that can be used not only for working on cars but also storing two vehicles in the same bay. They’re entirely American made. Learn why Backyard Buddy beats the competition. Our partnership kicks off now and they'll be with us at the 24H Series 24 Hours of COTA next month. Next season will be extremely exciting with many more events and two races abroad. Stay tuned later 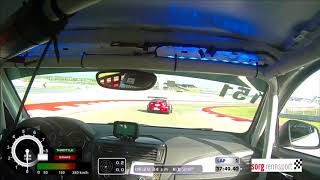 November 9-11 marked my first international sports car race. Although it was on U.S. soil, the field was made up of over twenty nationalities with teams and drivers from countries ranging from Germany to Iran. The team I was driving for was Sorg Rennsport, a highly successful German team with high fame at the Nurburgring. The car we would be racing was a BMW M235I Racing Cup car which competes in the all BMW “Cup 1” class. On Thursday, we opted to run a test day which allowed

Next Event: 24H Series Circuit of the Americas

My next event kicks off next Wednesday in Austin, Texas as we will be racing with the 24H Series. It's their first visit to the United States and the entry list looks strong with a great combination of American and European teams. I will be driving with Sorg Rennsport from Germany in one of their BMW M235I Racing cars. We have a five driver lineup and I'll be hoping to learn a lot throughout the event and enjoy driving at America's Formula One track. Stay tuned for updates, l