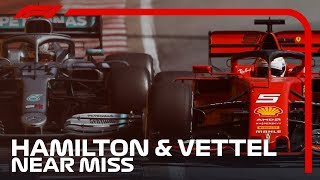 We've heard everyone talk about the recent Canadian Grand Prix and the controversy that happened in the race between Vettel and Hamilton. If you missed it, Vettel made a mistake, went four wheels off, and came back on closely coming into contact with Lewis Hamilton. I wanted to quickly give me two cents. Here's the video first: This led to Vettel getting a five second penalty which lost him the race even though he crossed the race in first place ahead of Hamilton. The problem
bottom of page