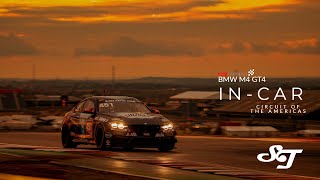 The finale of the 2019 24H Series season took place in Austin, TX for the third consecutive time. This was also the final round of the Champion of the Continents championship where we lead the GT4 category. When the season started in Dubai I was shocked to be standing on the grid in the UAE and had no intentions on chasing a championship in GT4. It seemed too unrealistic for someone like me I thought. However, when Olaf crossed the line in second place in Dubai it was too goo

The season comes to an end next weekend as we head to our finale in Texas. It has been an amazing year being able to race with Sorg Rennsport in a GT4 BMW and one to never forget. With two second place finishes we currently find ourselves leading the GT4 championship in the Champion of the Continents division and competitively placed overall. The GT4 lineup in COTA will be strong so we need to focus on our own race and try to get up to speed quickly. While the championship ca

We Can Win The Championship

If you told me last year I may be on the verge of winning an international championship I would have laughed. So far this 2019 season has been the hardest yet the most amazing year of racing I have done. It has been a continuous battle since our season opener. As someone who races on a nickle and dime budget, you can imagine the sacrifices and hardships we've faced to make this work. I owe my wife more than I can give for her letting me chase these dreams. While this series i

My final race of the year was at the Circuit of the Americas in Austin Texas. I was lucky to join Sorg Rennsport again in their BMW M235I Racing Cup car competing in the Cup 1 class within the Creventic 24H Series. Our weekend started on Thursday where the team finished up some prep work and we decided to opt out of the optional test. However, with permission from the series, the team asked me to go out for the final twenty-minutes of the optional free test to shake the car d

November 9-11 marked my first international sports car race. Although it was on U.S. soil, the field was made up of over twenty nationalities with teams and drivers from countries ranging from Germany to Iran. The team I was driving for was Sorg Rennsport, a highly successful German team with high fame at the Nurburgring. The car we would be racing was a BMW M235I Racing Cup car which competes in the all BMW “Cup 1” class. On Thursday, we opted to run a test day which allowed